Though I've loved to travel all my life, I've mentioned before that I only recently (as in, the past 2 years or so) started utilizing guidebooks. And to be honest I'm not super picky about them; I have yet to find one brand that I feel is the "absolute best". That said, enjoyment and quality wise my favorite has been the Frommer guide that I read before my 2010 trip to New Orleans.

Once we had decided which cities we would visit in Europe, first things first I went looking for some guidebooks. I got lucky and found two of them - Prague & Budapest - at a used bookstore in my city. This was toward the end of 2010 and they were 2009 guides, and in good condition to boot. They were both DK guidebooks, so I added the DK guides for the other major cities we were to stop in - Berlin & Vienna - to my Amazon wishlist and received them for Christmas. 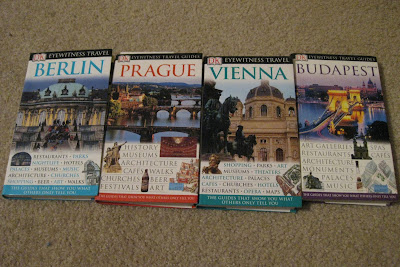 Quality-wise, the DK guides are great. Plenty of color photos, nice sturdy covers and thick glossy pages. They are long but not too long, but to be honest they aren't very "readable". I suppose if you are the type of person who wants a guidebook to flip through and look pretty, the DK guides are for you. I did take a lot of their sightseeing suggestions and I would say that about 80% of them were in fact great suggestions. I also really enjoyed the pages toward the end of the guides that discussed the local food and drink, giving suggestions of dinner entrees to order, local "cart" foods that were popular, beers and wines and more :)

The restaurants suggestions in these guides were great as well; we visited at least one in each city (two in Berlin) and had many amazing meals. To be honest though, the pricepoints featured in the guides were a bit lower than what the restaurants actually cost. For example, one of the restaurants we ate at in Berlin was labeled "$$" in the guidebook, but according to the amounts in the key it really should have been labeled with three dollar signs. (As a note, the Berlin guidebook I had was the newest one available.)

Again, though, these guidebooks were not readable. The organization was okay, but there were far too many tiny pictures and blurbs in extremely small fonts. As I prefer to actually read a guidebook, I can safely say that I won't be picking up any more of them from DK anytime soon.
Posted by Tara at 10:53 PM