Last month we finally got to check out Grown Ups Night at the Children's Museum! I was pretty excited about this because we missed the one they had earlier this year...obviously I don't have kids, so I never look at the Children's Museum website and I'm certainly not a "fan" of them on Facebook for that same reason. The Grown Ups Night event doesn't appear to have much advertising outside of these two mediums, so it's easy to miss out on. But who doesn't want to go eat good food and drink some wine and beer and act like a kid for a few hours?
We pre-purchased our tickets but arrived only to find that people who pre-purchased tickets had to wait in line to pick them up and get in...while people who were buying them that night got to walk right inside and buy their tickets! Other than a slight price difference ($15 each for pre-purchased; $20 each to buy at the door) there doesn't seem to be much incentive to buy your tickets online before the event. Especially if you're only one person buying one ticket and not part of a couple buying two...that extra $5 to not wait in line outside sounds good to me! That said, I do think there should be more incentive outside of a price difference for those who buy their tickets beforehand. Just sayin'.
I was actually pleasantly surprised at the many and varied food options offered at this event. There were wings, bread and dip, chips and dip, meatballs, fried mac-n-cheese balls, cupcakes, fried oreos, ice cream/gelato...the list goes on and on. Unfortunately, the drink options weren't as great. The fact that all food and one drink was included in the ticket price was great, but the fact that there were just a couple wine choices, a couple beer choices, and a hard cider that they ran out of within about an hour was disappointing to say the least. Some mixed drinks would have been nice, but if all they could have was beer and wine they should have had some better options! How about some local brews - Thomas Creek, RJ Rockers? Maybe try to feature regional wines?
The Children's Museum is in fact really cool. And they had a great local DJ - DJ EZ - as entertainment. We got to play in the "Supermarket", climb in the suspended maze, experience the wind tunnel and pretend we were construction workers. We even considered going to the wine making seminar, which was unfortunately a disappointment - the room was really hot, the seminar lasted way too long, and the wine tasting at the end was sad. Just tiny little samples in tiny little plastic cups :-/ I guess that's why it was free, haha. 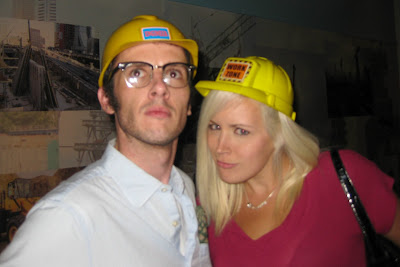 I hate that it sounds like I'm doing a lot of complaining about this event, because we really did have a good time. I think if they had had more/better drink options (especially at $4 a beer!) and it had been a bit less crowded, the event as a whole would have been ten times more enjoyable. We may give it another go in the future, and I do think that it's the type of event that everyone should make up their own minds about and therefore at least check out once :)

If only to climb in that suspended maze and play in the wind tunnel. For real. 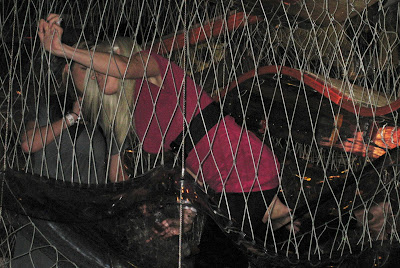 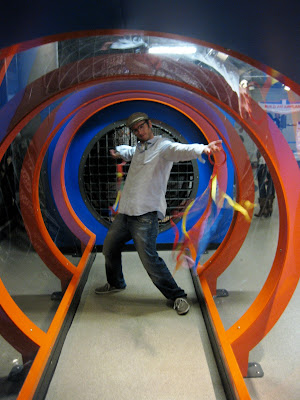