Ford's Oyster House & Cajun Kitchen: Great food, but where are the Pimm's Cups?

Ford's Oyster House is the lucky restaurant that picked up the empty space where Halfway to Habana used to be. This prime location was just itching for a longer-lasting restaurant and bar, and let's just say that we hope Ford's is it!

We dropped by here for an early lunch one Saturday, though we had already grabbed beers here after a Drive game a few weeks prior. The menu looked too good to pass up, especially as we're big fans of New Orleans-style food.

Up first - the New Orleans Style BBQ Shrimp! We had this dish in NOLA last year and loved it - my only issue is that Ford's uses the tiny shrimp and the classical style of this dish uses large shrimp with at least the tails still attached. Regardless, it was a yummy appetizer and I definitely suggest giving it a try.

Unfortunately, Steve wasn't very hungry and my sister who was also with us isn't adventurous. She had the cheeseburger Po'Boy and he, a side of red beans and rice. I on the other hand had been dying to try one of their Hot Muffaletas! 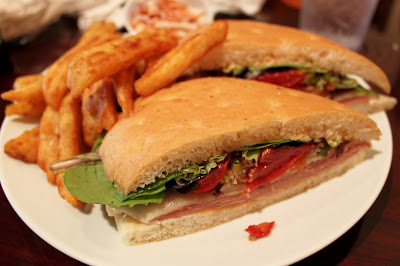 Though my sandwich was neither cold nor hot (despite the name), it was delicious and reminded me very much of the one I had at Napoleon House in the French Quarter last year. If you're a sandwich person it's a must-try :)

Despite the fact that I was full and couldn't even finish my yummy sandwich and delicious french fries (seriously, I'm not a big french fry person and these were good), I had to order dessert. Because I'd been eying the Ford's menu and along with the muffaleta the Double Chocolate Bread Pudding was calling my name. I shared it with my sister and we both loved it!
Needless to say, I'd already heard good things about Ford's and I was not disappointed. The only thing I really wish they would do? Embrace their New Orleans theme just a little more. I know, I know, what in the world am I talking about? One look at their menu and you see they have etoufe, gumbo, crawfish, oysters and po'boys along with the BBQ shrimp, red beans and rice and muffaletas.

But despite hearing live music here on our first stop, I haven't seen them feature a jazz or brass band yet. This is a niche that Greenville is sorely lacking in, as only the pricey Brown Street Club downtown features jazz music regularly. On top of that...the bartenders at Ford's either don't have the ingredients or the knowledge to make a Pimm's Cup or a Gin Fizz (though to be fair I didn't ask for a Hand Grenade or a Hurricane and they may make those). My motto for restaurant "theming" is Go Big or Go Home so what are you waiting for, Ford's? ;)