The Trappe Door has it all!

(If amazing food and an awesome beer selection constitute "it all" for you like they do for us, that is)

We got together with a group of beer loving friends to check out The Trappe Door last weekend, and I can't emphasize enough how great the entire experience was. Although I do wish they had assigned our group of 14 two waiters, the one we had did a good job keeping up with us and was also extremely knowledgeable about the beer list and able to make some great suggestions.

The Trappe Door is a fairly new establishment located under Barley's Taproom, the main entrance being on West Washington between Barley's and Wild Wing Cafe. Personally I'm a bit tired of bars opening in basements in downtown Greenville - when they get crowded it gets a bit creepy and the bathrooms never work properly. But thankfully, The Trappe Door isn't trying to be more than exactly what it is - a Belgian themed restaurant and bar located in the exact place it should be, a basement with wood beams, dim lighting and sparse decor. 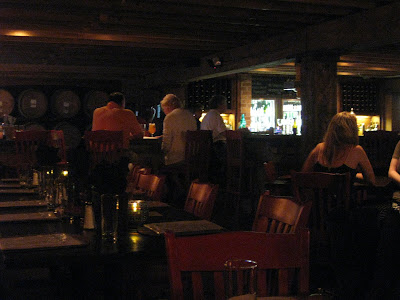 Along with a great setting, The Trappe Door offers over 150 beers, the majority being true Belgians with a short list of Belgian style beers brewed in the US and Canada. As previously mentioned, our waiter (I'm pretty sure his name was Eric) had tried many of the beers on the list and with just a bit of explanation about what beers we liked was able to give many of us perfect suggestions. My absolute favorite of the ones he gave me was Unibroue's Trois Pistoles - by far one of the best beers I've ever tasted! 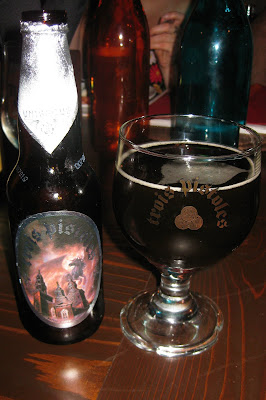 Now, I was so hungry that I put away my food (and some of Steve's) before I could take pictures, but we tried the Lamburgers with beet relish and goat cheese, the Carbonades flamandes, and the Belgian waffle dessert. The Lamburgers were good as an appetizer, but to be honest for $9 I wish there had been more than just two of them. Also, the Belgian waffles could have used more ice cream (one tiny dollop of vanilla over three large portions of waffles just wasn't enough!) and maybe some more fresh fruit as well, but were otherwise delicious.

However, the Carbonade flamandes - a traditional Flemish beef stew - was possible the best beef stew I have ever tasted. It was worth every penny (at only $14) and I cannot recommend this dish enough.

A friend that was with us also tried one of the mussels dishes and ranted and raved about it; in fact not one of the 14 of us had complaints about any of our food or any of the beers suggested by our waiter. 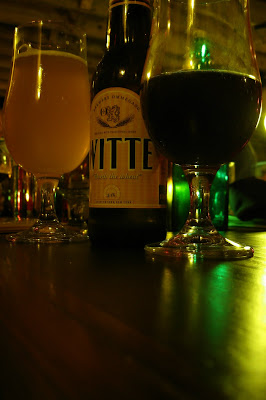 All in all, The Trappe Door is a great experience and an awesome new hangout. Whether you just want to grab a great brew or have a tasty meal and the whole shebang, this is truly the place to go. Just keep in mind that you pay for what you get - although there are a handful of beers on the list that run $4-4.50, the majority are in the $7-9 price range...but worth every penny ;)