"I'll take the butter burger, please!" or, The Story of how One Woman lost her Steak-n-Shake Virginity

I'll admit it - I have a long history with Steak-n-Shake.

Not because I'd ever been there before, mind you. Because I refused to go there.

I'm not even sure how or why it started. I do know that in the summer of 2002, one of my best gal pals extolled the virtues of Steak-n-Shake to me and repeatedly attempted to convince me to go along with her as she grabbed numerous late-night meals there each and every week.

When I "met" my friend Marcy in late 2008 and realized that she had what can only be called "a Steak-n-Shake problem", I had been set in my ways for so long that at best I would ignore her stories about her numerous Steak-n-Shake visits; at worst I maybe poked fun of her about them (to her, not behind her back!). But when she started her quest - "Around the State in 70 Steaks. And Shakes." - I had to follow along.

Now, the idea to participate in said quest was something that came to me slowly but surely. Maybe it was that Marcy was going out of her way to visit every Steak-n-Shake in the state of Indiana...in the course of a single year. Maybe it was the mouth-watering pictures of burgers and milkshakes on the monthly Steak-n-Shake coupon page that kept finding its way into our mailbox. Or maybe it was the anagrams.

Okay, it was probably the anagrams. 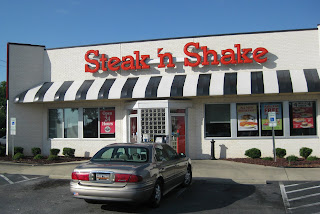 Finally, one Sunday I pulled the Steak-n-Shake coupons out of our junk drawer (seriously, that's what we call it) and announced to my husband that we were going there for dinner.

"What the heck is Steak-n-Shake?" he asked - because he never lived anywhere other than Connecticut (until late 2009) and we don't have Steak-n-Shakes there.

"Err...I think it's sort of like Friendly's?" I explained (yes, with the inflection of a question. HA! rhyme.) "But with milkshakes instead of sundaes."

Husband wasn't sold, but he knows better than to say "no" to me and off we went. 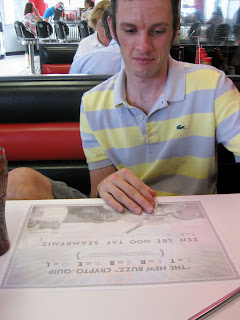 The restaurant wasn't too busy when we arrived, but the hostess didn't seem to have any idea on God's green Earth where to sit us. Seriously, I couldn't tell if she just didn't want to be there or if she maybe wasn't intelligent enough to handle her job. We were finally shown to a booth and greeted by our waitress - who was the same age as the hostess (late high school? just graduated? an age that's so far in the past for me I can no longer tell exactly how old kids are when they're in that general range) but the exact opposite of her in personality. Her name was Mandie and although I think Husband scared her a bit with his anger over his placemat puzzle, she was absolutely great. Really friendly and engaging.

I, on the other hand, impressed her with how quickly I solved my anagram. I maintain that I did not use the picture of a stack of 32 pancakes as a hint. (Yes, we counted the pancakes, and there are 32 pictured.) 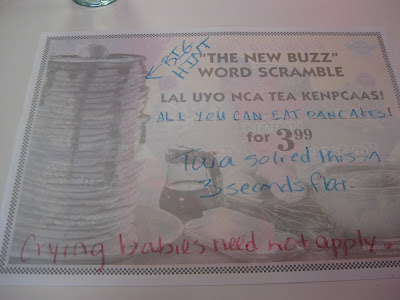 My meal was a Wisconsin Buttery Steakburger, fries, and a Chocolate Chip Cookie Dough milkshake with chocolate chip cookies on the side (!!!), which I just had to order after reading about it in one of Marcy's blog entries. Husband ordered a Pepperjack melt and a Peach milkshake. 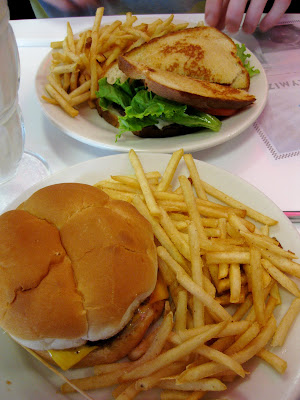 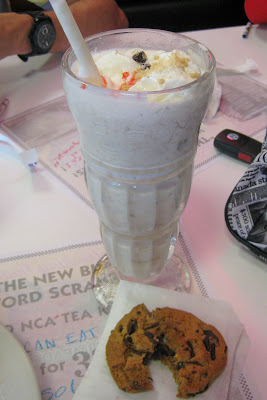 ...it was all delicious! Though I'm not sure about the butter burger (a bit too greasy, but that should have been obvious) we both wolfed down our food, and when we were too full to finish the milkshakes there you bet your butt we took them home with us. 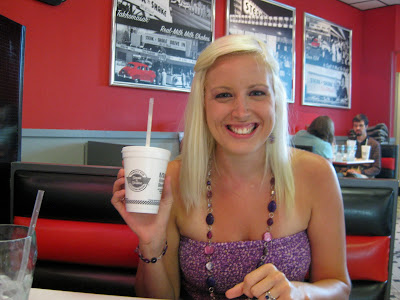 And - excitement abounds! - those coupons even came in handy! Albeit only for my burger and Husband's milkshake. 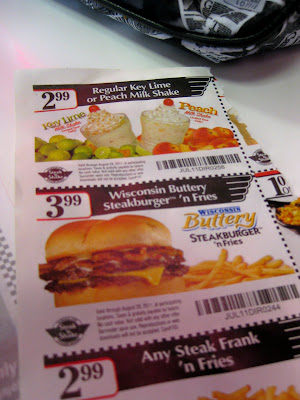 Our Very First Ever Steak-n-Shake visit was a rousing success. I think it helped that when we walked back outside, stuffed to the gills with burgers and fries and milkshakes, there was a gorgeous classic car parked right in front of the restaurant. 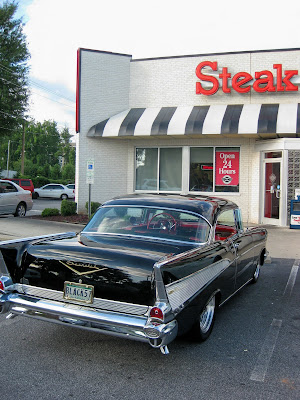 Though you may never replace Friendly's as my favorite burger-and-ice cream-joint, I will be back. Just keep sending those coupons. Thanks for being so good during my first time.

Yours, butter burger filled stomach and all,
Tara
Posted by Tara at 6:01 PM