Vacation prep can be fun!

Today my husband and I are doing some prep work for our trip to Europe later this summer. It's been four years since I went overseas and Steve hasn't been since he returned from his year abroad in the late 90s!

Of course I do the usual - read guidebooks and do Google searches. At the moment I'm working on the days we will be spending in Marseilles/southern France, though, and it's easy to make that fun! For instance, I spent the morning reading
We also made some of our famous homemade iced coffee, which isn't necessarily French but hey, they like good coffee, no? ;)

And once afternoon hit, it was time for lunch! 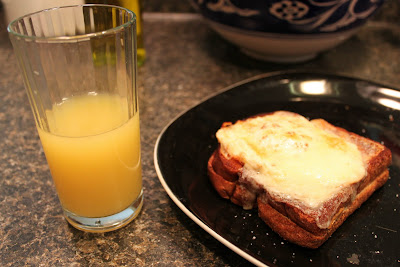 Mimosas and Croque Madames, of course, though we had sparkling wine rather than actual Champagne (because Champagne is only Champagne when it's from the Champagne region of France, of course).

Just goes to show you that trip prep doesn't always have to be poring through guidebooks and Trip Advisor reviews :)
Posted by Tara at 12:33 PM

Email ThisBlogThis!Share to TwitterShare to FacebookShare to Pinterest
Labels: planning