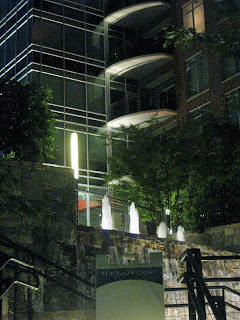 Last night we finally got to try Table 301's Lazy Goat restaurant, located behind the Hampton Inn on the river. The space itself has an interesting layout and great views; we ate outside and were even treated to live music from a jazz fest happening across the water.

Our reservation was for 8 PM but we arrived a few minutes late and were seated at about 8:20. We were able to order drinks right away - Steve and I shared a pitcher of the St. Germaine cocktail - but then we waited at least 20 more minutes before our waiter finally came back and took our dinner order. One of our friends tried to order the lobster risotto, but they were out of lobster. Thankfully the waiter was ready with the option for her to have the risotto with shrimp at a slightly lower price, and she accepted.

We had ordered numerous tapas for the table - the duck duck pizza, the fried goat cheese, the Moroccan lamb, and the garlic shrimp. Steve ordered the lazy paella and our other friend ordered the cuban pizza...only to have the manager approach our table about 10 minutes later and explain that they were out of something needed to make the cuban pizza, as well! Our friend changed his order to a different pizza, but at this point the situation had already been frustrating and did not bode well for the rest of our time at the Lazy Goat.

The tapas came out first, of course, and we munched away. Everything was tasty, thankfully - I especially enjoyed the garlic shrimp and the Moroccan lamb, though the lamb was only tops when served with the yogurt sauce on the pita bread (by itself it tasted a bit over-seasoned).

About the time we finished with the tapas, the waiter brought out Steve's paella. About ten minutes later he brought out our friend's pizza. The risotto never came. Eventually we approached the manager about this; he promised to rush it out but at this point our friend didn't even want it (understandably). The manager, George, was extremely apologetic and honestly handled everything very well; I absolutely have to give him props for that. Obviously we didn't have to pay for the entree that never arrived, but in the end I was charged for extra pita bread that I never received (and only didn't complain because everything had been such a mess and it was just $1) and we weren't really given anything but an apology for the slow service, the fact that they were out of two of the things we ordered, and just the general messiness of the entire experience.

The friends that we ate with have been to Lazy Goat numerous times and said this was the first time they'd ever had anything other than an awesome dinner. I'm obviously inclined to believe them, but to be completely honest the whole experience left a bad taste in my mouth. There are so many awesome restaurants in downtown Greenville and when it comes down to it, even if we'd had a perfect meal I wasn't so impressed with the food, especially when considering the prices at Lazy Goat. Tapas-wise, I suggest Cazbah or Nose Dive; if you're looking for a nice meal in the $20-30 per entree range, you're better off at Sassafras or Soby's.