Well folks, it's that time of year again--baseball season, of course--and if you've been reading our blog for a while you surely know that we are big fans of the Greenville Drive. Heck, we had our wedding reception at a game last August! We are also [partial] season ticket holders - we have the weekend package, which gets us tickets to I think 12 weekend games and 3 weekday games. Perfect for us as it's difficult for us to make the weekday games, and the Drive is also great with working with us if/when we need to switch out our weekend games as well! 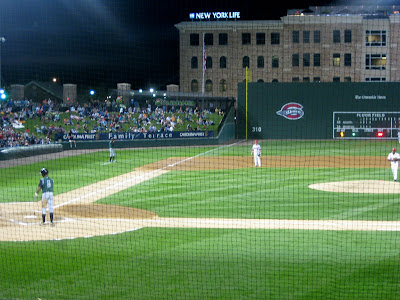 Anyway, being the 8 to 6-ers that we are, we were a bit late for the game on Thursday. Boo. We arrived to pick up our season ticket package at 7:10 but were honestly surprised to hear that the game had already started...and it didn't help things that the will-call line was a good 20 people deep. It took us about another 10 minutes of waiting to pick up our package, but hey, it was only the bottom of the first at this point, so we sucked it up and didn't complain much about the line.

Unfortunately, when we entered the stadium we realized that the lines to get wristbands (which you need to purchase beer) were twice as long as the will-call line! I've been going to Drive games--mostly weekend ones, and this was my third opening game--since 2007, and I have never, ever seen the wristband line this long. 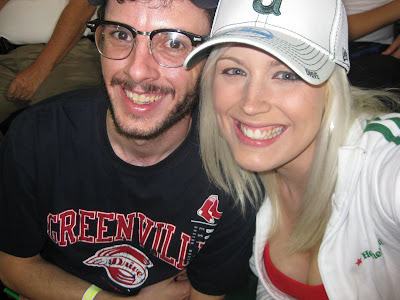 But of course we waited. And a good 10 minutes later, we finally had our wristbands. And we missed a couple awesome runs by the Drive. So at this point...we were not so happy.

The concessions line was only about 5 people deep but again led to quite a long wait. As such, it was every bit of 7:45 before we took our seats, $5 large Yuengling drafts in hand, and got to actually enjoy the game.

Thankfully, the Drive did not disappoint! They beat the Augusta Greenjackets a whopping 12 to 6, and at the end of the evening we were again quite pleased with our Drive experience ;)

We have yet to try out any of the new concessions; however, the new menus--which are on flat-screen TVs--were definitely a great addition (not surprisingly). We only hope that they work out the kinks with the lines, because as the night wore on and people took their seats this game didn't seem any more crowded than opening night last year, or any of the sold-out weekend games I've been to in the past. Hopefully they were just a bit slow on the uptake and things will improve. Regardless, we'll be attending plenty of games this season and you're sure to hear about our upcoming experiences. Until then...let's PLAY BALL!
Posted by Tara at 11:55 AM