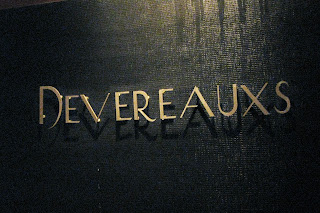 It's that time of year again--Restaurant Week in Greenville! Unfortunately, this year our budget only allows us to go out once and we chose Deveraux's, which is probably Table 301's most high-end offering.

The Restaurant Week menu at Devereaux's was in our minds one of the more diverse and yet still only $30 for three courses; that, combined with the fact that we hadn't eaten here yet, is what sealed the deal on choosing this particular restaurant. We were not disappointed!

Before our appetizer choices were served, we enjoyed samples of a fennel soup enhanced with lemon juice that was absolutely delicious. The bread came next--a tasty cheddar and chive biscuit and what I think was a honey wheat roll or something of the sort. Unfortunately I found the latter a bit hard and dry for my taste.

For the first course Steve had the Rabbit Risotto and I chose the Butternut Squash soup. Please excuse the lack of photos--neither of these was a terribly photogenic dish, but I assure you that they were both amazing. It is easy to miscook rabbit or make a butternut squash dish that is too bland, but Devereaux's didn't have either of those problems.

Our entrees were the Scottish Salmon and the Roasted Duck Breast. The salmon was served with a sort of watercress broth; personally I prefer my salmon with a thicker, sweeter sauce but the fish itself was at least high quality and cooked to perfection.

And the duck...oh, the duck! This dish was by far the best duck I have ever had. Also cooked to perfection and served with amazing compliments--basmati rice, sun dried cherries, carrots, etc--I simply couldn't get enough. I seriously could have ordered this dish times three and still wanted more! Not to mention the beautiful presentation:
Last but not least, usually my favorite course: dessert! Steve chose the Apple Bread Pudding with Maple Brown Sugar ice cream, which I of course got to sample; I was a bit more "adventurous" and had the Rosemary Funnel Cake with Pumpkin Crisp Ice Cream. Unfortunately, at this point my camera decided to quit working and I didn't get any pictures--but while the bread pudding probably looked more appetizing, I was more than pleasantly surprised with my funnel cake. This wasn't your county fair funnel cake, folks--it had a rich brown color and a mere dusting of confectioner's sugar, a crisper texture and the pumpkin ice cream was a perfect complement. If I ever return to Devereaux's, I at least know what I'm ordering for dessert! 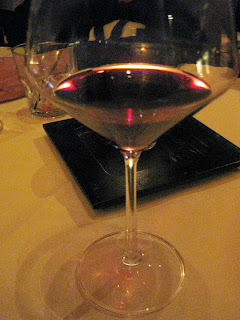 We had also opted for the wine pairings, an additional $15. They served us a Chardonnay with our appetizers, a Merlot with our main course and a Port with dessert. I think a white wine would have been better paired with the salmon and a dessert wine rather than a port with our "sweets", but all three options were at least good of their own accord.

On a final note, despite the restaurant being very crowded (to the point where the hostess even commented as we were leaving that we should come back on a more "normal" night) the service was still good and the atmosphere pleasing. Devereaux's is a hit in my book--in fact, I'd rank it with American Grocery and I certainly think it was better than High Cotton, which are both supposedly in the Devereaux's "class" when it comes to downtown Greenville restaurants.