Steve and I were actually introduced on Saturday, October 31, 1998--over 11 years ago now. Because of that, we feel that Halloween will forever be the holiday that is most special to us--even if we have only spent three Halloweens "together" since that fateful night my junior and his senior year of high school. I am happy to report that this past weekend was another awesome, eventful Halloween together.

First of all, Steve is an awesome boyfriend in that, given certain limitations, he will dress up with me as a pair. I didn't have the heart to ask him to do it last year, though--I was Tinkerbell, and I'm pretty sure no amount of begging would have convinced him to put on some green tights and be Peter Pan. This year, I decided to recycle an old Marilyn Monroe costume of mine (moving and buying a house has left me perilously short on expendable cash), and he happily agreed to be the Arthur Miller to my Marilyn Monroe. Of course, he looks more like Buddy Holly, but we hoped that the pipe helped things a little bit. 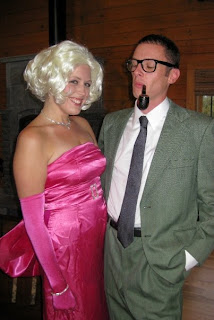 We actually had a great Halloween--in fact, a great first night out in Greenville--planned. Early last week, we were walking downtown and stumbled upon a poster for The Roots, one of Steve's favorite bands. They were playing at a bar called The Handlebar--on Halloween! I have to admit, I was a bit skeptical about going to a concert on Halloween, but they were encouraging costumes and Steve was hell-bent on seeing The Roots. In the end, I had an amazing time. For those of you who don't know, The Roots are a hip-hop band--and yes, I mean band. They had a guitarist, a drummer, a keyboardist, a sousaphone, and of course an MC. Although I had heard (and enjoyed) some of their music, I have to admit that I was a bit surprised at how amazing they were live. This is one of the things I love most about Steve--he not only wants me to try new things and wants me to experience the things he loves, he insists that I do so. And as it turned out, the concert in no way hindered our Halloween experience.

A picture of Black Thought, the MC, and the sousaphone player, Damon "Tuba Gooding Jr." Bryson, at the beginning of The Roots' set-- 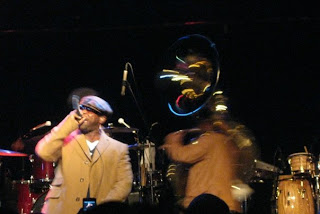 The concert actually ended at about 11:45, and from there we met my sister Christy at a bar called Zippers--halfway between downtown Greenville and my parents' house, which is where we are staying until we close on our house (another story for another time). There wasn't much going on at Zippers, and we wanted to party a bit closer to "home", so after one drink we headed to ESB.

How to explain ESB...well, it's a redneck bar, close to being in the middle of nowhere. Close to the middle of nowhere actually meant that it was close to where I used to live here in South Carolina, and it was therefore one of my usual haunts. A lot of my friends hung out there and the drinks are cheap...what can I say?

Unfortunately, when I say that ESB is redneck, I mean that it is redneck. My sister's now ex-boyfriend was involved in a fight there, and my sister and I almost got in a fight there earlier this year. Halloween night turned out to be the "same ol', same ol'". Certainly not because of anything myself or Steve did--I really believe that other girls really just want to pick fights with my poor sister. In this case, a woman shoved by Christy, causing her to spill her drink. A simple, "Watch where you're going!" from my sister meant that for the rest of the night, the woman (I call her a woman because from the looks of her, she was at least 30) was trying to convince the owner to kick us out, giving us nasty looks, flicking us off, sticking her tongue out at us, calling Steve "four eyes", and telling everyone in the bar that she was going to "kick our asses".

The time change and the fact that ESB is technically a private club meant that we stayed out until about 3 AM, dancing, singing karaoke, and chatting with some old friends of mine. And even though the night included a bit of drama, it was still a good one.

Of course, I don't think we will be going back to ESB anytime soon ;o)
Posted by Tara at 11:10 AM